My Tweets
Join 449 other followers

Many people don’t think of Poland when it comes to important historical events. And yet, today, May 3, 2015 marks the 224th anniversary of the second-oldest constitution in the world—the Polish Constitution of 1791. Its emphasis on achieving more equal rights and protections under the law for all Poles preceded that of any other country, except for the United States. It’s here that we begin to see that Poland and the U.S. share a special connection, rooted in both countries’ forward-thinking (for the time) beliefs that people aren’t necessarily just subjects of some king, but citizens of a free nation.

This special connection between Poland and the United States has persisted throughout the centuries and comes to light especially strong every May 3rd during the Polish Constitution Day parade in Chicago. For the past 124 years, Poles, Polish Americans and even Americans with no Polish background have marched together  in a sign of multi-ethnic unity and national pride.

I have heard some Poles say that this unity and pride displayed in Chicago during the May 3rd festivities  surpasses that found even in Poland. How can that be? How can Poles thousands of miles away be just as, if not more, patriotic than those in native Poland?

Truth is, the farther you are from home, the more you have to hang onto that patriotism if you want it to survive. It’s why every time I go to Poland, I like wearing American shirts, whereas here I hardly ever do. In Poland, it’s taken for granted that you are a Pole; in America it’s taken for granted that you are American.  People like to emphasize their uniqueness because we all want to be different and stand out. In Chicago, the Polish-American community sticks tightly together, and when it’s time to come out in force, they don’t disappoint.

That’s part of it—the other part is that there really is a special connection between the U.S. and Poland. We are cut from the same tree—the liberty tree. The Polish constitution  was miles ahead of the rest of Europe. Even as early as the 16th century, Poland was already experimenting with more equal forms of government in the “Noble’s Democracy.” Poles and Americans think alike, and we therefore support each other, especially on May 3rd, which symbolizes the best of what we have in common.

I really felt wonderful walking through the streets of the Windy City fully decked out in my Polish gear. It instilled pride knowing that America’s third largest city was Polish for a day. A sea of red and white flooded Dearborn Street, and I never had to walk long to bump into another proud Pole. 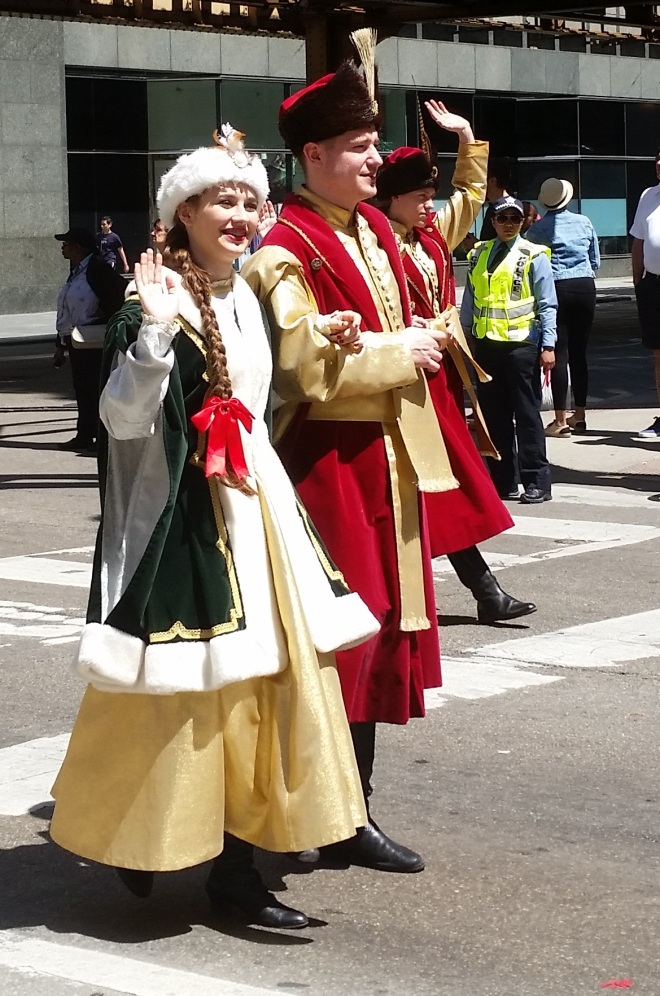 One particular moment during the parade epitomized the Poles’ unmatched persistence. As the parade floats were crossing under a set of train tracks, some were too high and couldn’t fit. A few floats actually bumped into the tracks and were partially ruined. When it came to a float containing a large cutout of a Jesus figure, the Poles were not going to allow it to slam into the tracks. Slightly bending the figure, the people on the float managed to fit Jesus through the rail tracks as the crowd thunderously applauded and cheered. It was a funny little moment, but it symbolized how the Poles always find a way. Soon after the Polish constitution was ratified in 1791, Poland was conquered and partitioned by outside powers. Many swore then that Poland would rise again, and the constitution would not have been drafted for nothing. And so it happened…the Poles somehow found a way.

2 thoughts on “A Tale of Two Countries: Live From the Polish Constitution Day Parade”