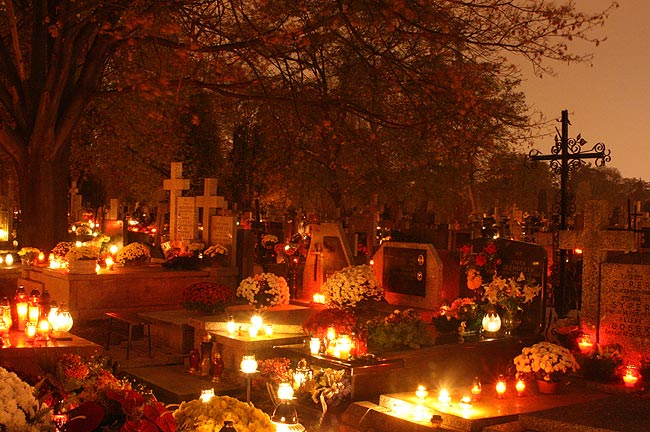 If you want a treat in Poland on Halloween, you’d better be ready to play some tricks because America’s spookiest holiday really isn’t a big deal there (although that’s slowly changing).

It all begins on the eve of “All Souls Day,” November 1. Traditionally, entire families would gather for a large dinner in the evening. Now, when I say entire families, I mean living……and dead. Extra spaces would be reserved at the table for deceased family members and other wandering spirits that would emerge from the netherworld on that night. Indeed, the entire point of “All Souls Day” is to offer prayers for restless spirits trapped in purgatory, stuck between heaven and hell. Traditionally, on that night, families would chant:

Holy sainted ancestors, we beg you
Come, fly to us
To eat and drink
Whatever I can offer you

Special food would  then be served such as buckwheat groats, kutia, and  “soul bread.” The “soul bread,” known as zaduszki, would be made of rye and shaped into a long loaf to represent a dead person. Naturally, the food would be shared with the deceased at the table, and vodka (probably what the spirits were actually after in all this) would be  poured out for them as well.

Following the meal, Poles made, and continue today to make, pilgrimages to local cemeteries to honor their dead. They light candles and place them on the graves; this custom goes back to pagan times, the idea being that the heat from the candles will warm the forlorn spirits wandering the earth. They typically attend Mass at this time as well.

On this night, centuries ago, Poles would also give leftover food to beggars (called dziady) who would pray for deceased loved ones in return. These mysterious beggars acted as intermediaries between the living and the dead.

Driving through the Polish countryside on  the night of “All Souls Day” can be a truly magical, surreal experience. As the candles from thousands of individual graves burn in the distance, you cannot help but feel a mystical connection to the supernatural. You can understand why on this night the lines between the realms of the living and the dead are blurred and why it’s the opportune time to pray for those lost souls, whom we may one day join.

Today, many Polish superstitions have died along with those who observed them, but the religious significance of the holy days remains stronger than ever. Poles often tend to group “All Saints Day” and “All Souls Day” into one giant observance meant to honor and pray for the dead. People don’t work and schools are closed on those days.

These holy days are not unique to Poland. Catholics around the world observe them to some extent. Poles just happen to add their own unique and interesting flavor to them. It’s a beautiful custom that not only fosters a common religious experience, but also adds to Poland’s national identity.

So during this mystical week, you won’t see many trick-or-treaters in Poland. You might, however, run into a wandering spirit. In that case, you’d better have a bottle of Smirnoff on you.