My Tweets
Join 450 other subscribers 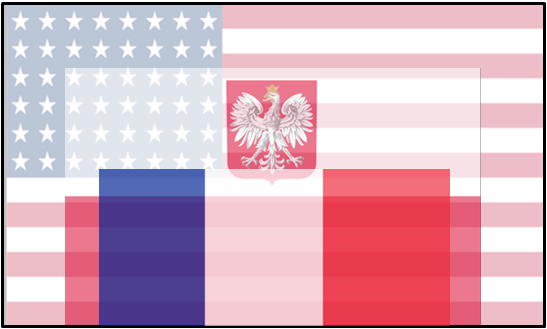 Friday’s horrific terrorist attacks on Paris were a global tragedy. They reminded us that no one is safe anywhere, not even while unwinding on a Friday night after the work week. It really hit home, no matter where you live.

At the same time, the solidarity displayed around the world has been amazing and will hopefully lead to the defeat of the evildoers. As Poles and Polish Americans, especially, we share  a bond with the French people that not everyone does.

The United States, Poland and France together pioneered the concept of constitutional liberty and democracy in the late 18th century. Effected in 1789, the U.S. Constitution was the first of its kind, espousing the principles of individual freedom in an age when monarchical rule was the norm.

Two years later, on May 3rd, 1791, the Polish Constitution was signed, granting greater political equality and  popular sovereignty across the land. Sadly, the partitions of Poland a few years later caused many to forget that Poland codified the second democratic constitution in the world.

A few months after the Poles, the French adopted their own constitution. Although it was also short-lived (Napoleon enacted imperial rule a few years later), the French Constitution of 1791 legalized the French Revolution’s principles of liberty, equality, and fraternity.

Thus, the U.S., Poland and France are sisters in freedom. Together, they set the standard for  liberty and democracy that has been adopted around the world in succeeding centuries. During World War II, all three countries joined forces, bravely combating the totalitarian evil of Nazism. Although Poland and France were defeated, their resistance movements were the largest in the war, relentlessly fighting the Nazis until the Americans landed in Normandy.

For this reason, Americans, Poles, and the French must support each other in this time of need. An attack on one of us is an attack on all of us and on the values we collectively fathered over two centuries ago. As individuals, we can only do so much, but a good place to start is with a prayer for the victims of this catastrophe.